Hidden Side of Montana

This article was originally written for Wilderness Culture:

The lure of Montana is undeniable. Dreams of mountain peaks and glacial lakes fill the heads of adventurers when someone even utters the word Montana. And how could it not? With the iconic mountains and lakes of Glacier National Park making up the northwest, and legendary skiing of Big Sky’s Lone Peak attracting adventurers and tourists for decades it’s tough not to be drawn to this beautiful state. I’ve spent my life living in and exploring these mountain paradises, but through years of travel around the area I discovered a secret side.

Ask anyone from the western half of the state what happens when you drive east of Billings and you may get some chuckles and scoffs. The southeastern section of the state is an untouched haven that most Montanans haven’t even discovered yet. Disregarded as flat, prairie land, southeast Montana is often ignored by the millions of adventurers coming to explore Glacier and Yellowstone National Park. But the truth of the east is a land of canyons and badlands, a harsh yet uniquely beautiful locations begging to be explored.

Exhibit A: Makoshika State Park – Just outside of the small town of Glendive, Montana lies Montana’s largest state park. A variant spelling of the Lakota phrase for ‘bad earth’, Makoshika is home to badlands that haven’t changed since dinosaurs used to roam this Earth. Odd shaped hoodoos and natural bridges dot the landscape and give it more of a Utah feel than Montana. The trails of Makoshika may only run a few miles, but off-trail travel is encouraged and the possibilities are endless.

Exhibit B: Terry Badlands – I’ve had the opportunity to shoot on four continents and dozens of countries in my short life and to this day one of my favorite memories is the day I spent at the Terry Badlands. It was the dead of winter and southeast Montana isn’t exactly known as a winter destination. But I still wanted to drive into the badlands and at least get an idea of what they looked like for future exploration. A quick stop for a photo turned into a six hour stay a top one of the bluffs, all because I instantly fell in love with the badlands. I set up a hammock, made some dinner, and didn’t see or hear another soul for six hours. The Terry Badlands are the definition of solitude.

Exhibit C: Bighorn Canyon – The moment I get a call from a friend telling me they’re coming to visit me I put together a plan to take them to Bighorn Canyon National Recreation Area. This 71 mile long canyon reaches depths of up to 2,500 feet and is often referred to as the Grand Canyon of the Rockies. It has become my personal playground and I’ve taken the likes of Keith Ladzinski of National Geographic, to adventurers Brooke Willson, Trevor Lee, Jacob Frank, and more to shoot this area. I’ve visited Bighorn Canyon dozens of times, and every single time I’ve had the park to myself.

Adventure, to me at least, isn’t found by taking turns standing at an overlook mere feet from a popular pull out. Adventure is about getting out there. It’s found in the solitude only possible by getting away from the crowds. And this is why I will always have a place in my heart for southeastern Montana. Countless sunrises and sunsets were spent alone and shared with friends, all the while soaking in being the only people for miles and miles. I’ll forever cherish where late nights around campfires turned to early mornings playing on the edges of cliffs. 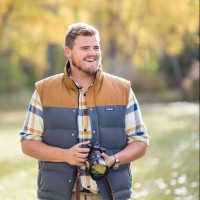